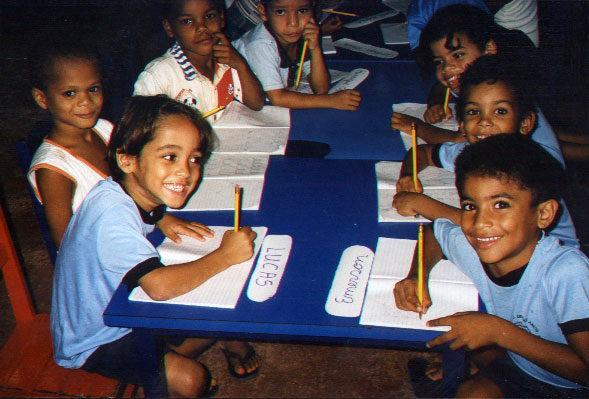 Joaquim Nabuco is a rural town with around 17,000 inhabitants that is located in Pernambuco, a north-eastern region in Brazil, and is 118km away from Recife, the state’s capital city. It was the first independent city to be founded at the end of the 19th century by slaves who had escaped from the sugar cane plantations and obtained their freedom. Its economy is mainly based upon sugar cane plantations, which belong to the big “usineros” which run all the sugar production in the area.

The work revolves around these “usinas”, the sugar processing factories, which, during the harvest for six months every year, employ the majority of the men, women and young people in the area. However, during the remaining six months of the year the number of staff needed drops by 80% and many are left out of work until the next harvest.

This situation can cause extreme poverty and Joaquim Nabuco finds itself faced with countless social problems: many children and teenagers end up on the streets, growing up alongside delinquency, illiteracy, prostitution and drugs, above all on the outskirts. It is in this context of temporary work, lack of health care and difficult social conditions that the Divino Amore nuns began an aid mission in 1991 with the collaboration of Modena Terzo Mondo and the parish of Padre Luigi de Rocco di Belluno.

It was in Joaquim Nabuco in 1992 that Modena Terzo Mondo carried out its first long-distance aid project. Since then there have been different humanitarian aid activities and individual and group training events, which have created very strong relationships between the locals and the Italian volunteers. At the moment Modena Terzo Mondo is primarily supporting the ‘Joaquim Nabuco Youth Foundation for Life’.

The young people in Joaquim Nabuco created a foundation called the Joaquim Nabuco Youth Foundation for Life, which is based in the Youth House. It is a place for them to get together and hold meetings and events to help them grow culturally and professionally. The house was bought in August 2004 and renovated shortly afterwards.

The house is equipped with a computer and an Internet connection so that all the young people can learn how to use technology to search for jobs or maintain email contact with far-off friends and family.

Anyone who has a talent or a skill (such as painting, dance, theatre,…) or knows a profession (such as carpentry, dressmaking, first aid,…), whether they are an Italian volunteer or a local, can teach it in workshops to those who have no opportunity to attend other courses due to a lack of money. Nowadays there are around 450 children who participate in the house’s activities.

The house contains books, videos and a television for those who don’t have them at home. Little by little furniture has also been installed, to enable Italian volunteers to stay there when they come to Joaquim Nabuco. The running of the house is left entirely up to the Joaquim Nabuco Youth Foundation for Life.

The activities that are taking place or have previously taken place in the house, thanks to the collaboration of young volunteer teachers from Joaquim Nabuco, are as follows:

In May 2004 Modena Terzo Mondo donated a car to the Council to allow them to intervene as soon as they hear about an incident and travel to remote places which are unreachable on foot or by bicycle.

Over Christmas the Council gave a present to all the native families of Joaquim Nabuco, consisting of a basket containing food, essential items and a small gift for the children, through the ‘People’s Christmas’ project. This gave everyone a festive atmosphere and the impression that it was special day to be celebrated. Modena Terzo Mondo funded part of the baskets.