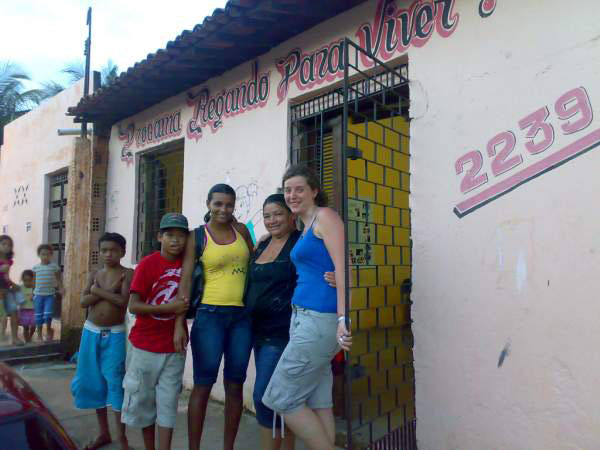 The Ceará Prostitute’s Association began as a social movement in 1990. Its main aim is to defend prostitutes by fighting against the prejudices of a city which is still sexist, patriarchal and hypocritical. Defending them in this way emphasizes the social need for public policies, opening a social and political gap to promote better living and working conditions for the countless women who choose prostitution as a source of income and employment.

When the first case of AIDS was discovered in a Ceará sex-worker, it prompted a series of prevention initiatives inside this group. For example the InterAids project mobilized various teachers who set about educating men and women involved in prostitution.

The need for prevention was added to the demand for better living and working conditions for sex-workers. On the 13th November 1990 former and current prostitutes and volunteers officially agreed to set up the Ceará Prostitute’s Association. “For the prostitutes, the moment had arrived for them to stop being marginalized or treated like drug addicts, and to begin to be citizens” said Rosarina Sampaio, the ex-president of APROCE, referring to the moment the Ceará’s sex-workers’ organization began.

Founded 21 years ago, APROCE was the first prostitutes’ association to be registered in Brazil using a real name, instead of a false one. After so much discrimination, prejudice and violence, the prostitutes decided to prove to everyone that they deserved respect. They began to act more responsibly, like confident women who were often more head-strong than many others, and capable of acting as mothers in cases where a girl’s parents had not assumed their responsibility to protect their daughter.

The 1980s saw the spread of AIDS and the Ministry of Health (at that point there was no separate department for STDs, HIV or AIDS), thanks to a surveillance project, paid particular attention to the prostitutes, who were seen as being a particularly high risk group for the spread of the disease. So the prostitutes joined the fight against the epidemic that had been up until then unknown. They began to distribute information on STDs, HIV and AIDS and preventative materials, and to organize meetings for both the prostitutes and other sectors of society, which they continue doing to this day.

Their efforts were added to the work already begun, such as the struggle to defend their human rights and to allow the prostitutes to lead a better life. Now APROCE has almost 4000 members and in the 1990s it was responsible for setting up various similar associations in the north, the north-east and other regions in the country. APROCE works with many companies and government and council departments in Ceará, but mainly those that are involved with health, education, culture and social development.

However the big challenge is keeping these projects going even when there is political transition and the project managers change, given that renegotiation is not always possible. But the projects continue thanks to the prostitutes’ efforts which prevent the activities from coming to a halt. Unfortunately this is not always enough to ensure they function well. The prostitutes need money in order to support themselves and their families. One of APROCE’s main goals is to find alternative means of support so that the women can create and develop projects, giving other prostitutes who don’t want to continue working the opportunity to find new a source of income by working in one of these projects.

APROCE has always worked towards preventing STDs, HIV and AIDS, widening access to health services, fighting prejudice and stigma, preventing violence against prostitutes and tackling the main causes why many young women become drawn into prostitution. Research conducted by APROCE shows that financial hardship and social exclusion are the principal factors in 63% of cases. In Fortaleza prostitution gets blurred with children and very often becomes sexual exploitation. APROCE’s other main causes are the fight against the commercial sexual exploitation of children and young women, sex tourism and human trafficking.

Given their dynamic approach, and having helped to expand and create associations in seven cities in the State of Ceará and in nine other north-eastern Brazilian states, APROCE is one of the institutions in charge of popularizing the sex-workers plight in the whole of the north-east. It is famous nationally and internationally for the work it does, both in the field of sex-workers’ human rights (in order to improve the prostitutes’ living conditions and developing better access to health services) and regarding its activities to prevent the spread of STDs, HIV and AIDS.

Since it was established APROCE has been concerned about the link between prostitution and children. This concern has given rise to prevention projects such as ‘Flor em Botão’, ‘Menina Moça’ and ‘Se Liga Galera’, and there have been real accomplishments in the struggle against sexual exploitation and child sex tourism, as well as in the fight against human trafficking. This occurs mainly through campaigning or collaboration with various projects.

It is sadly a well-known fact that Fortaleza is one of the havens of the international sex tourism industry and every year thousands of children are exploited for personal pleasure by people who take advantage of their destitution. The Association has been reporting and tackling this phenomenon for over four years and would now like to build two exploitation prevention houses, with IT and literacy courses, sport, drama, dance, capoeira and music lessons, a canteen and a kitchen, etc. to give so many people the possibility of a better future. Rosarina Sampaio runs the association and they need help in showing that the supportive side of Brazil is stronger than the exploiters. A fundamental part of the project is its sporting activities. In the Bom Jardim and Farol neighbourhoods there are no youth centers open to all the young boys and girls and what they need most is a place to meet for group activities, in order to get them off the streets. To start with, they have partly restructured a house and courses in dance, capoeira and music take place in the main hall. There is a small dining hall (which is to be enlarged), a kitchen, hygiene facilities (to be enlarged) and another two rooms. The next big step is to raise enough funds to build the gym hall, which will cost a total of €45,000 and will improve the lives of hundreds of young girls and boys.

The need to create the NSWF became apparent in 2007 during a meeting held by APROCE on human rights, which was attended by prostitutes from all over the country. Seeing as they had previously been excluded from discussions on prostitution, this made them feel valued for the first time. Rosarina Sampaio was elected to be the Federation’s representative because of her expertise, charisma and popularity. Beyond the need to face up to issues affecting prostitutes, the NSWF was created to officially involve prostitutes in the fight against violence and sexual exploitation of children and adolescents. This remains a core aim of their mission.

Although the NSWF was formed only recently, it has already participated in various events and projects in collaboration with Modena Terzo Mondo and other government institutions. Next year they are planning to create a website for reporting any type of violence against children and adolescents. The SEMAS project against human trafficking will also be continued. The participation of Rosarina Sampaio, the president, and others at national and international seminars and events will be important for spreading information on their activities and finding new supporters. Their fight for a better quality of life for all prostitutes is finally being recognised.